Emotional Space and the Puppet

Earlier this year I collaborated in an extraordinary research project called The Emotional Space and The Puppet. Here is a short article about the work written by Joy Haynes, organiser of the project.

The Emotional Space and The Puppet – by Joy Haynes

Why tell a story using puppets? For me, they provide a truly different perspective – a puppet evokes emotion yet does not have memory or  feelings of its  own. A puppet is entirely present and it is through action that an audience  empathises  with the character.

Earlier this year, I organised a five day research project in which a team of theatre professionals worked with master puppeteer and director Luca Ronga, whose background and passion is the simplicity and directness of glove puppetry. His unique approach is to create emotional and physical spaces in an audience’s mind’s eye through physical gesture.

In an extraordinary process, we learned not to make the glove puppet mimic human actions or to charge them with enormous emotions but rather to translate the  grand  scale of the human experience into the poetic language of the glove puppet, which is delicate and playful. 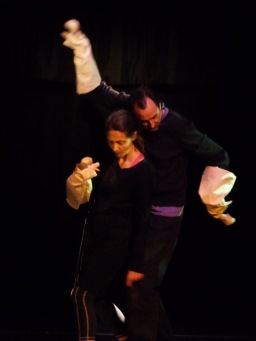 I discovered the power of starting from one clear point of reference, in which a single movement/gesture is expanded and through  its  repetition is taken away from the personal and transformed into something different and universal.  It was fascinating to see how character and situations were generated from single words, such as ‘ family’, ‘terror’, restlessness’, ‘solitude’.

With the absence of the traditional glove puppet booth, I observed the energy and focus of the  ‘actor’  presence becoming the emotional counterpoint or providing a context/playboard and, most interestingly, playfully embodying landscapes and architecture.

Looking back on the research, I  realise  what a wonderful and instructive week this had been in developing my personal approach to puppet theatre and the devising process.

If you’d like to have your expectations of puppetry challenged and your theatre-making skills developed through exploration of physical space as a means to translate inner emotional landscapes, Luca Ronga will be running a masterclass entitled The ‘Emotional Space’ at Norwich Puppet Theatre on the 15th & 16th April. Booking on Tel: 01603 629921.  Hope to see you there.

← Bringing the Metaphor to Life
No comments yet